Here's a 3d painting done in Oculus Quill. The piece is based on a previous illustration that I had: 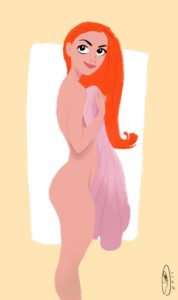 In this video you can see the process of making this piece. As you see, I start by just tracing the original drawing with 3d strokes. The result is a flat sketch but using Quill's tools I'm able to push and pull around the strokes I made to give the drawing more dimension. Then I start adding more sketch lines defining the hidden parts of the character that we don't see in the 2d original drawing. Slowly I create something similar to a wire sculpture that is used later as a guide for adding the 3d volumes with color.